For Alexandra she knew that adoption was the only way that she would get her cats. With millions of healthy, beautiful loving animals at rescue organizations, she would not dream of going anywhere else. Back in 2006, she made the decision not only to adopt two cats, but also give back part of her time by volunteering with a rescue group. Her thought process was that while she was volunteering, she would get to know the cats and it would help her choose the two that she would eventually take home. Her mother happened to live right across the street from Ollie’s Place, so she was familiar with the organization and it was an easy choice for her to want to volunteer there. 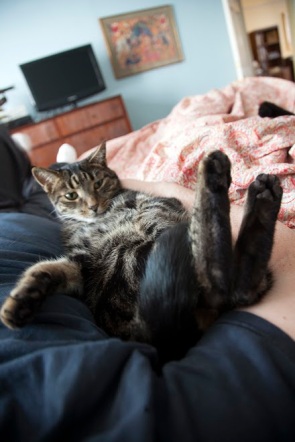 It didn’t take long for Alexandra. On her first day as a volunteer, she walked upstairs into the cat room and she met Danny. As Alexandra put it, “it was love at first sight!” Danny was about a year old when she adopted him. She recalled how she saw this big, gorgeous, tabby cat was perched up in a cat tree and how he had this goofy, but sweet expression on his face. It turned out that his looks were not deceiving – he actually was as sweet and goofy as he looked. She said the decision was easy – “I bent down to say hello to the cats below him and he stuck out his paw and tapped me on the head.” That was all she needed to decide that Danny would be hers. Since bringing him home, Danny has been sweet, healthy, and as friendly as they come.

The second cat that she fell in love with was Shelby. Shelby was a little older – she was somewhere between eight and ten. Alexandra said that Shelby used to lounge around all day on a huge leopard print cat bed right in the middle of the floor. One day, Alexandra went over and lay down next to the bed and gently called Shelby’s name. Her head popped up, she turned and looked at Alexandra, and without hesitation she walked over and crawled into her arms.

Alexandra was lucky that these two cats had no major medical or social issues. There were the typical annoyances that come with adopting a cat – scratched furniture, early morning feedings, and litter box duty – but it wasn’t anything that a good scratching post and rearranging of a schedule couldn’t fix. Besides, those things were outweighed by the joy her cats brought to her life.

Sadly, Shelby passed away about two years ago. She became very ill and there was nothing that Alexandra could do. She told me that she wouldn’t have traded the six years she had with her for anything in the world. Her message to anyone who is nervous about adopting an older cat is: “Don’t base your decision on the age of the animal, but the personality.” With a personality that was cordial and slightly aloof with others, Shelby loved Alexandra unconditionally.

She feels that Mighty Mutts/Ollie’s Place has an incredible and dedicated staff of volunteers. Her advice when making a decision is to “talk to the volunteers who know the animals well – ask questions. Spend some time meeting the cats/dogs and get to know their personalities. Consider fostering an animal first if you are unsure about adopting. There may be an adjustment period – but nothing worth doing is without its challenges. The rewards are tenfold. And a rescue animal will never forget you gave it a second chance.” Alexandra told me that she would 100% adopt again.