For as long as she can remember, Eren has been rescuing animals. She remembers that when she was a little girl, she would cry whenever she saw pets in their cages. She has had pets that have come from the pound, rescued from other people that no longer wanted them, the side of the road, and even from a box in front of a grocery store. Eren’s first NYC dog rescuing experience was a pit-bull she found in Spanish Harlem laying on the street with a broken leg. She took him to the vet and he had an operation to put a steel rod in his leg. Once he recovered, he was an active, loving dog who loved to chase balls and sticks around for the rest of his life. Since then, Eren has been a pit mom! Eren’s first NYC cat rescuing experience was when she came across a man who had a pillow case full of kittens he was planning to dump in the Hudson River. She has had cats ever since, sometimes even two at a time.

Eren has always believed that rescuing is the “morally correct” thing for people to do. In fact, she estimates that between her and Jon, throughout their separate lives, they have had a combined total of at least 14 different rescued animals. Now, as a couple, they have two – a pit-bull named Terry and a cat named Benito.

Terry came to them through the ASPCA. With no real understanding or clear reason, Terry had been returned to the shelter three times before finding her forever home. It may have taken a little crate training and discipline, but Terry had no major issues that would provide any indication on why she was returned.

When they decided to look for a cat, the criteria was somewhat specific – they needed one that was “dog friendly”. Mighty Mutts/Ollie’s Place was one of the hits. Eren had always seen the Mighty Mutts van in Union Square and their setup inside of PetCo. When she got her first Pit a number of years ago, she actually used information from Mighty Mutts’s website to help her navigate the joys and troubles of owning a Pit. So when they saw the video of Benito on the Ollie’s Place website, they knew they had to meet him. 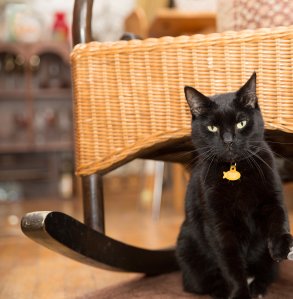 Benito came to Ollie’s Place after spending some time out in New Jersey. His backstory is a bit of a mystery, but it left him a little anti-social. There were lots of people rooting for him to find a home, and it seems as if he did well with Eren and Jon. Benito is really relaxing into his environment. He likes to sit in the window sill and stare out or lie in the middle of the floor gently swishing his tail back and forth. Everyone still seems to be figuring each other out. Eren said that “he is slightly moody and a very indignant cat. He observes his humans and the dog with such superiority! Like any proper black cat would do!” But, Eren feels that with time and patience, it is all worth it. She said that “No matter, what the challenges or problems have been with pets, every day with them is worth it- after all, it is also really hard to train humans.”

Eren also told me that in some way, she feels that all of the animals have actually adopted her. She said that with all of the crazy NY roommates, apartments, and relationships, her pets have helped her through. “I know that I could not have made it through all these years alone in the Big Apple without my four legged saviors who kept me sane (well by NYC standards anyway) and loved.” She also said that she would absolutely rescue again and that even though some of the animals that have come into her life had some health problems or left prematurely, every day they were with her was worth it. Her philosophy is: “I believe that rescued animals understand that they are rescued. They have chosen us. They in effect have rescued us. When we are humane, we are in essence more human.” 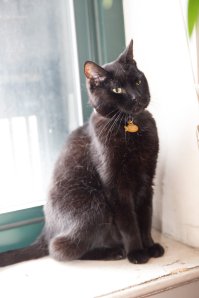 When it comes to adopting a rescued animal, Eren feels that an organization can be a great aid in starting people off with the right support and initial health costs. Knowing a little about the pet’s backstory also helps understand the psychological profile of the animal. Knowing these facts, in her mind, are “crucial to making a furry companion as happy as they make us.” All of these factors, combined with organizations that spay/neuter and vaccinate animals helps take some of the financial burden off as well.

With respect to Mighty Mutts/Ollie’s Place, Eren believes that the organization is “awesome with a great reputation.” All the people involved with the group that she has met reflect that. She said that people who work in places like this organization “need to have a lot of heart to speak for those who can’t speak for themselves. It takes special people to take in rescued animals, but it takes really special people to make sure the animals and humans find each other!” Eren and Jon are glad that Terry, Benito, and all of their previous pets all found them.