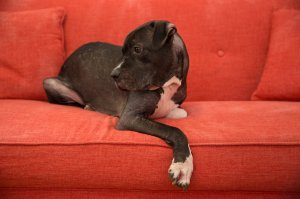 Samantha already had a cat that she rescued when she decided to get another pet. She knew that she wanted to rescue another animal, but I don’t think that she knew that in addition to rescuing a dog from a shelter, she would literally be saving his life. At the time, she lived in Chelsea and would often see Mighty Mutts set up in Union Square when she would walk through on Saturdays. Through Mighty Mutts, she met Pedro.

Pedro came to Mighty Mutts from a high-kill shelter in upstate New York. When Mighty Mutts found him, it was clear that he had not been provided with any sort of vet care. He was completely bald and covered in blood. He suffered from mange, hookworms, and giardia. When most would give up, Mighty Mutts took him and brought him to the vet for the care he so desperately needed. Pedro spent over a month in the vet’s office before being released back to Mighty Mutts. He was stabilized, but still had extensive medical needs and needed to find a place to live.

Unfortunately, in his earlier life, Pedro developed a fear aggression towards other dogs. They tried to put him in a foster home with other dogs, but it did not work out. Therefore, the only place they could keep him at the time was at Ollie’s Place. He became the resident dog there and he slowly began to trust other animals. He befriended a cat named Benito – the same one that was featured in one of the success stories posted last week! While he was at Ollie’s Place, Pedro started to get better. He had no shortage of love and care from the various volunteers.

However, it soon became clear that he needed to find a permanent home. His health started to deteriorate again. He stopped eating and because of his various skin ailments, his paws started bleeding and oozing on a daily basis. Finding a home for Pedro was becoming more and more difficult due to his various issues. In came Samantha. She fell in love with Pedro and felt that he “deserved a chance to know what life could be like outside of a shelter.” She remembers him having a shy sweetness about him and that he seemed sad being confined to Ollie’s Place. So many volunteers from Mighty Mutts had put so much time, love, and care into rehabilitating Pedro, that in April 2013, when the time came for Samantha to take him home, the excitement and joy was palpable.

Samantha said that when Pedro came home to her apartment, she lay down with him on his new bed and he just started to give her kisses. He knew that he found his forever home. Samantha was even able to get him to start eating again that very same day. Although, overall, he has continued to get better, there have still been many challenges since she brought him home. Pedro has had countless visits to the vet and several procedures. However, Samantha says that despite the ups and downs, his health seems to have stabilized and “we seem to be on a path toward good health!” Samantha also continues to work on Pedro’s fear aggression. She moved out of her building in Chelsea after her neighbors expressed concerns about Pedro’s interactions with other dogs. She now lives in a place where she is fortunate that the other dog owners in her building have been very accommodating and understanding. She said that Pedro loves being outside and she is working on reintegrating him into social settings with other dogs. 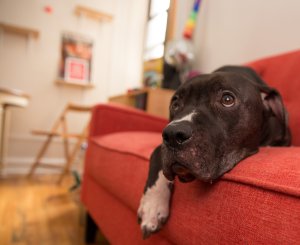 Samantha cannot even begin to describe how Pedro has changed her life. She said it has “made me into a mommy, a nurse, and a dog owner, which I wasn’t sure I’d ever be!” Having to deal with his health issues and being vigilant against his aggression, it has also made her into a more responsible and considerate person. Where most people would have given up, she gave up her apartment and moved to a new neighborhood in order to stay together. She embodies the true spirit of what it means to rescue a helpless animal. She says that through it all, their bond has just solidified. Pedro is her very own welcoming committee that she gets to come home to everyday. He may be a challenge at times, but he is also an amazing, lovable companion and she would not have it any other way.

She admits that being Pedro’s Mom is hard. With both medical and behavioral difficulties sometimes there is frustration. But, when she wake up in the morning and he crawls up and puts his face on hers and falls back asleep, it only serves to reinforce that she did the right thing for this dog. Pedro gives love to every single person that comes into the apartment. He has an incredible sweetness and goofiness that she is so glad exists in this world. “He makes me laugh every day, and steals my heart over and over again.” 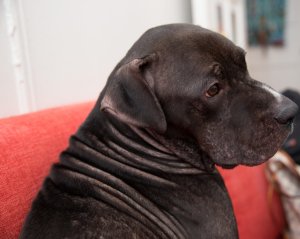 Unfortunately, Pedro’s situation wasn’t rare. It happens way too often. These defenseless animals are put in situations where they are fighting for their lives. What we don’t see enough of is the selflessness in people to take in those dogs that many would simply ignore. Without Mighty Mutt’s intervention and continued support, Pedro would undoubtedly have died a painful death. Samantha said that “he is lucky to be alive and we are both thankful to Mighty Mutts for recognizing the value of saving even the sickest of animals. Throughout my year with Pedro, and due to the extremity of his case, I have received an incredible amount of support from Mighty Mutts. They are always willing to rise to the occasion when challenges arise and I am so thankful for that. I simply couldn’t do this without their help.” 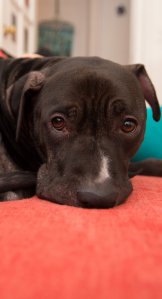 *Please read the attached brochures on Pedro’s full backstory and the AMAZING work Mighty Mutts did to save this little boy’s life.  FUN FACT: PURCHASE A MIGHTY MUTTS T-SHIRT TO SUPPORT THIS WONDERFUL RESCUE AND PEDRO’S HANDSOME FACE IS ON IT TO MAKE YOU SMILE! 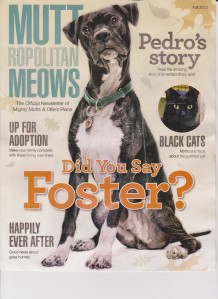